Award-winning Ghanaian singer, Becca, known in real life as Rebecca Akosua Acheampong got herself some attention on social media after some images of her popped up that she has actually bleached.

The 33-year-old artist though denied bleaching her skin, recent reports and talks on social media won’t just allow her to be after coming out of retirement to release her first song titled “No One”.

In the new song, Becca sang a line “black and proud”, which have since sparked some controversy as to what the real complexion of Becca is.

Reacting to the line, Akua Blakofe who’s the former Deputy Chief Executive Officer of the Ghana Tourism Development Company (GTDC) now known as Saneeheneba Akua on social media has given some hints as to why Becca seems to be bleaching.

And according to Saneeheneba Akua, Becca is bleaching to please her husband.

Sanaaheneba Akua publicly denounced being a fan anymore by explaining that it is because the Becca she knew who was as black as herself is now looking very fair.

She wrote; “I’m no longer a fan. She looks disgusting. Because Nigerian women are “fair” she wanted to look that way for her hubby? And sorry to say, but men who go down on women who bleach, doesn’t it affect their brains? Sucking those chemicals? How do they deal with smelly skin, especially down there???? Because I know bleached skin smells, so down there dierrrrrr… Yuck yuck yuck”.

Someone just read this:  'Becca Is Disgusting'- Blakofe Goes On Rampage 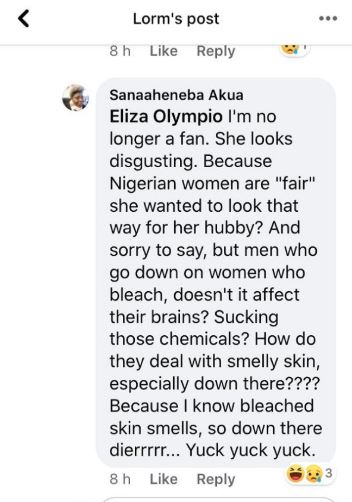 She also asked Becca what she meant when she claimed that she is black and proud.

“Becca says she’s black and proud. Discussion today, what does it mean to be Black and Proud. Lezgo”. Becca Starts New Fun Challenge, #WearHis As She Tries To Get Rid Of Boredom – Video

Female songstress Becca as part of her ways and means to get ride of boredom in these boring quarantine times has launched a new...
Read more
Entertainment News

Becca was heavily trolled on social media for stealing her new single dubbed ‘No One’ featuring Busiswa and Dwp Academy from South African Sho...
Read more