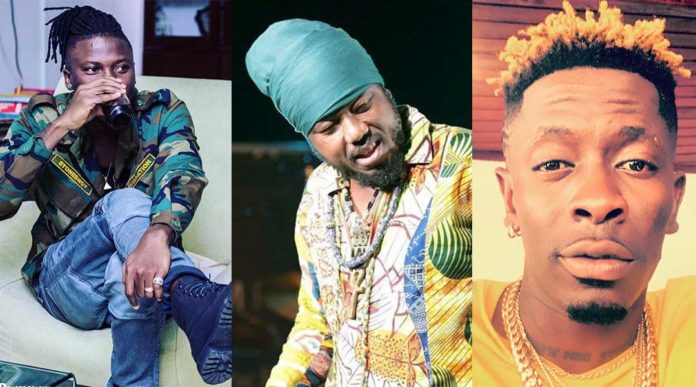 Ghanaian Reggae musician and Radio personality, Blakk Rasta have waded into the ongoing argument as to why Shatta Wale wanted to mount the stage while Stonebwoy was about to give his acceptance speech upon winning Reggae/Dancehall Artist of the Year.

According to the press statement released by Shatta Wale’s management yesterday after been granted bail, he was only relocating to the VIP section when a member of his entourage told him to pass by the stage and congratulate Stonebwoy but Blakk Cedi sensing danger due to their rivalry took it the wrong way and started attacking them and they also had no choice but to defend themselves.

It seems his explanation doesn’t match his actions and according to Blakk Rasta, Shatta wasn’t in any way going to congratulate his arch-rival from the look of things as seen on TV and by people who were present at the show.

Read also: I Don’t Mind Having A One Night Stand With Shatta Wale- Actress Kisa Gbekle

Blakk Rasta who was at the auditorium and has witnessed the same incidence back in 2013 when Kaakie won the same award category has stated in an interview that Ghanaians should stop the numerous explanations and call a spade a spade.

Blakk Rasta made reference to comments made by Shatta Wale before the show where Shatta said that if he doesn’t win in that category, what happened in 2013 would repeat itself.

In 2013, female songstress Kaakie got entangled in Shatta Wale’s nest for winning the same award and this made Shatta Wale scatter and break chairs at the awards night since he thought he was the one who deserved the award.

After all the initial threat, Shatta Wale repeated the same action at the 2019 Vodafone Ghana Music Awards when Stonebwoy won that title for the fifth consecutive time.

Read more: Provisional Charges Against Shatta Wale And Stonebwoy Revealed, They Have Been Arraigned Before A Circuit Court

Blakk Rasta making reference to this said Shatta Wale again thought he would be the one to win in the category this year too. But since he lost to Stonebwoy, that made him step the stage with his gang which made Stonebwoy to also pull out a gun.

According to Blakk Rasta, Shatta Wale was only going to create a scene on the stage and revealed that he wanted to get onto the stage and break the rostrum, get hold of the award plaque, break it, take the mic and shout into it that it’s a fake award scheme and that he has been cheated.

Read also: Blakk Cedi is to blame for initiating the chaos at the VGMA’s – Management of Shatta Wale (Screenshot)