Investigative journalist, Kemi Olunloyo has dropped another bombshell against familiar ‘victim’ Davido. We don’t know if the elder woman’s journalistic career depends solely on the award-winning singer as she keeps prowling around his family for every little detail that could nail him.

According to Dr. Kemi Olunloyo, Davido is married to a lady based in the United States called Hermadine and she accessed their marriage license in ATL last year. For this reason, the controversial Nigerian journalist said Davido’s current girlfriend, Chioma whom he has promised to marry will continue to wait forever because there’s going to be no marriage.

Chioma Rowland has no idea that if Davido ever marries her she will be in a polygamous marriage. Mumu of the highest order. Hermadine is the official wife. I told you that February 2020. Hermadine posted hers in June after I obtained their marriage license in ATL 2019 FEM. 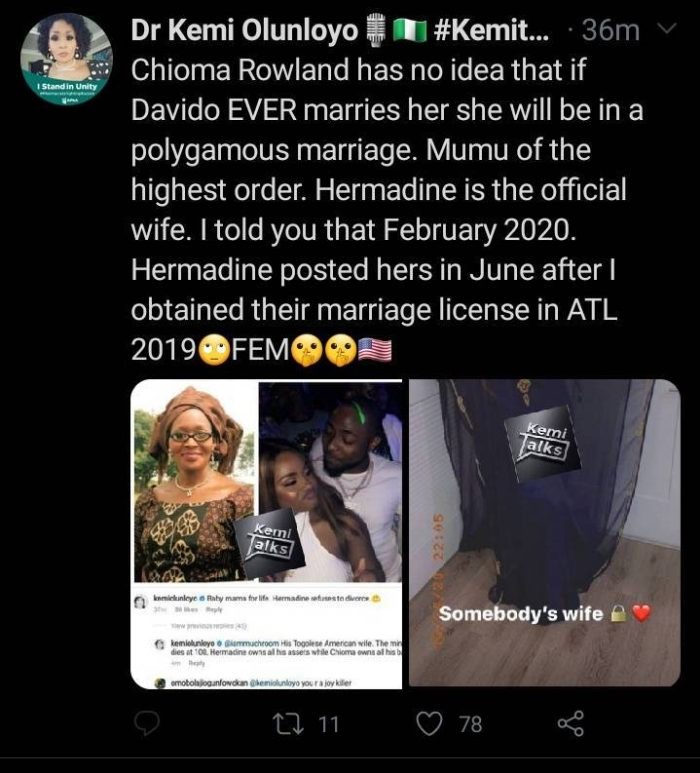 Top 10 Nollywood Actresses That Cry The Most In Movies Which Can Get Y...

‘Men Have to Respect Their Wives, I Spent Two Days With My Kids ...