A survivor of the plane crash that killed most of the Brazilian football team Chapecoense has walked away from a coach smash that claimed the lives of 21 people.

Erwin Tumiri was one of just six people to survive the LaMia Flight 2933 on November 28 2016 near Medellin in Colombia which killed 71 of the 77 people on board including 19 players.

Today, it emerged the 30-year-old had cheated death for the second time in less than five years after a packed coach careered down a hillside near the Bolivian city of Cochabamba.

The death toll from yesterday morning’s tragedy currently stands at 21 and more than 30 people are said to have been injured.

Lucia Tumiri, confirming her brother was in hospital but had only suffered minor injuries, said: “I was very worried but he’s stable and thank God he’s survived once again. 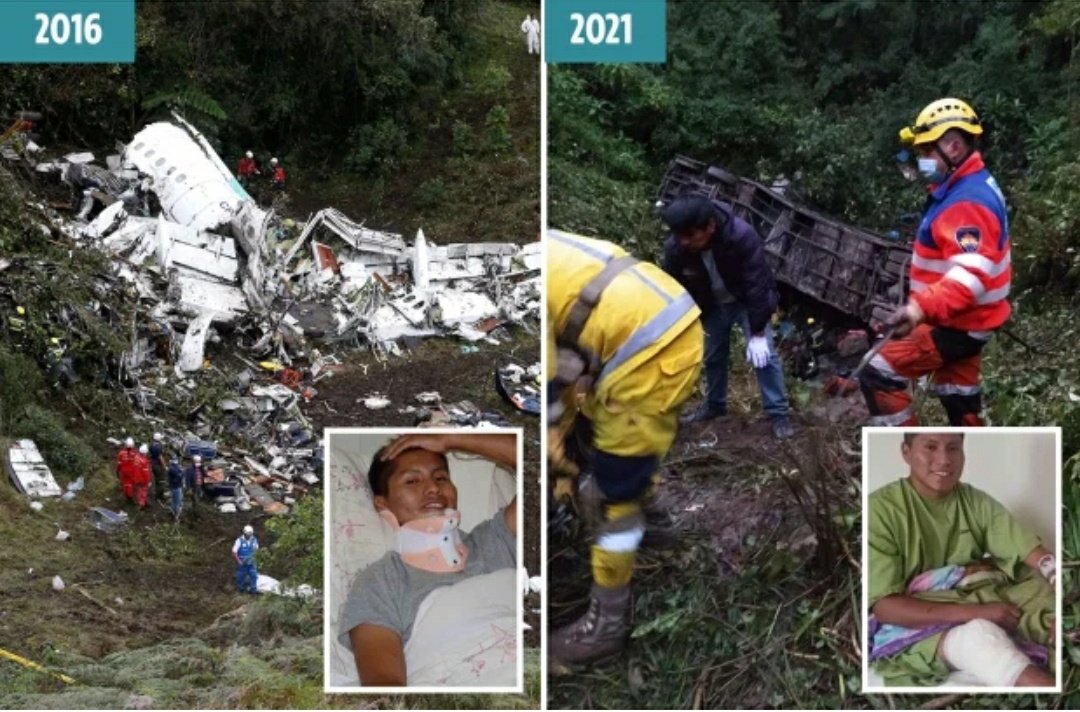 “He has knee injuries and scratches on his back. I’ve spoken to him and he says he’s okay.”

Erwin, one of the crews onboard the Chapecoense plane, told local media of his incredible new escape: “I was feeling a bit sleepy and listening to music on my mobile phone when I heard people screaming.”

The only thing I could do was hold onto the seat in front of me, broaden my shoulders and lean against the window so I wouldn’t move as the coach overturned.”

Speaking from his hospital bed with a bandage over his right knee but smiling despite his fresh ordeal, he added: “I felt the coach was going to overturn and it did.

“I remained conscious throughout and managed to crawl out of the vehicle when it came to a halt.

“I can’t believe what’s happened. I’ve got injuries to my arm and I can’t lift it up at the moment but I’ve been told I will recover mobility little by little. And I’ve got a gash on my knee, but that’s all.

“Things happen for a reason,in the good times and the bad.”

Cristian Rivera Rojas, a traumatologist at Arebalo Hospital in Cochabamba where Erwin is being treated, added: “There are no bone or ligament injuries. What Erwin has got is a flesh wound in his knee that needed cleaning and stitches.

“He’s stable, conscious and calm and he will be able to go home soon.”

More than 52 people were on the coach, which plunged nearly 500ft down a steep embankment on the road linking Cochabamba to Bolivia’s largest city Santa Cruz.

It went off the road around 1 am on Tuesday in an area known as El Canadon, part of the municipality of Colomi in central Bolivia.

It has become clear that most young ladies of today no longer fancy going out with men who are...
Entertainment News

VIDEO: I Am Not A Stingy Man, Rose Was Just Demanding Too Much From Me And I Lost Interest – Manbossey Of Date Rush...

‘If Religion is Something Good, The White Invaders Wouldn’t Have Brought It To Africa’- Actor