A Twitter called Bassey has made a startling remark on social media which has since gotten people talking. On the surface, his statement might sound ridiculous but a careful analysis reveals that it wields so much wisdom.

He started by saying any person who is ready to date or flirts with his girlfriend should go ahead and do it. He further added that if a man asks her out and she accepts to go out, then he’s free to pamper her, and to be the boyfriend he could not be to her.

He supported his statement by saying it’s only a girl who is not loyal that allows herself to be used by other men when she’s already in a relationship. He wrote;

“Because She’s my GIRLFRIEND, It Doesn’t Mean you Cant CHAT Or FLIRT With Her. Brother, If You Ask Her Out Or Invite Her Over, She Agrees,

Fix Her, Buy Her What She Needs &Go Out With Her.

If Things Go Further, So Be It, Just Be The Boyfriend I couldn’t Be For Her. Because If I Was The Boyfriend She Really Wanted, She Wont Flirt Or Come Over To You While She Has A Boyfriend.

Dont Fight A Fellow MAN Over A GIRL,

You Can Only Keep A Woman Who Wants To Be Kept”. 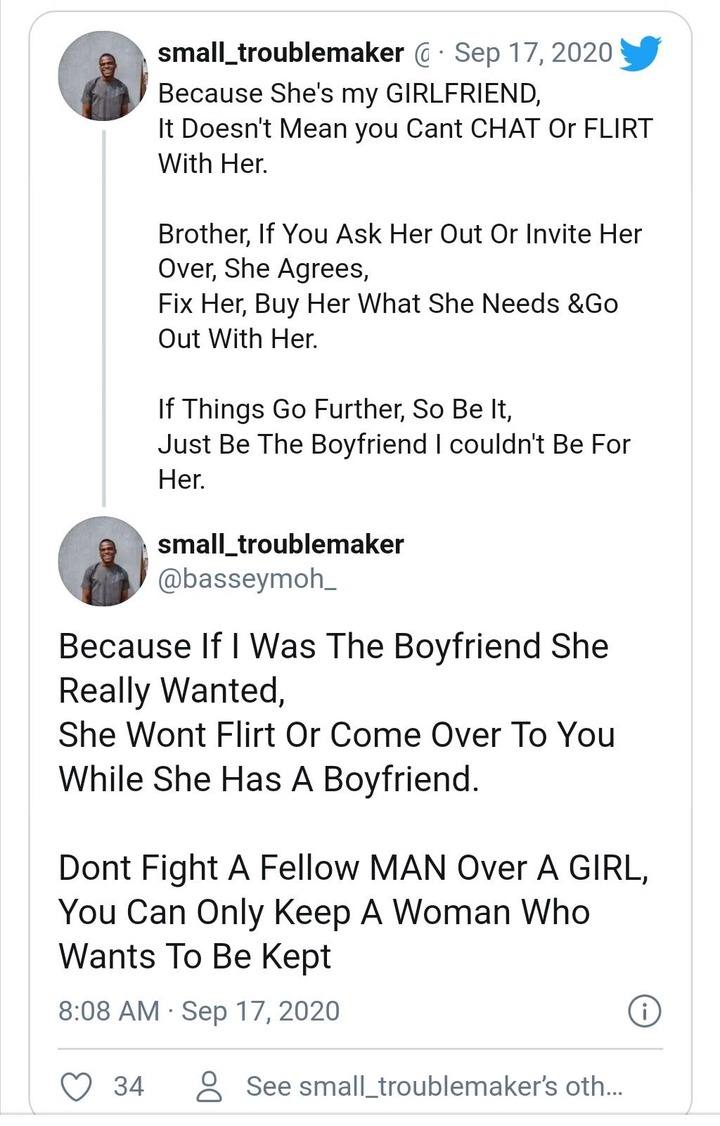 🔥‘ "My friend told me she's okay that her boyfriend has a sidehick when I told her my boyfriend was cheating on me---- what should I do?"👇 👇

“Half of my salary as MP will be reinvested in the youth” ...

Storngman And Daughter In A Dance Battle In This Cute Video...

(Video) My Son Says I Walk Like A Duck And Adds Prove – Nana Aba...

Just In: Naa Ashokor Tests Positive For Covid-19, Tells Ghanaians To B...

Sarkodie applauds Prez. Akufo-Addo and his government. See what he sai...