Fresh-faced American singer and songwriter, Trey Songz has sparked a heated debate online. In an Instagram post, the smooth singing R&B superstar said all ladies born after 1993 don’t know how to cook.

He argues that this generational ladies only know how to party, twerk, and being bisexual. The post read, “Any Female born after 1993 can’t cook, All they know is McDonalds, Charge their phone, Twerk, be bisexual, Eat Hot Chip and Lie.” 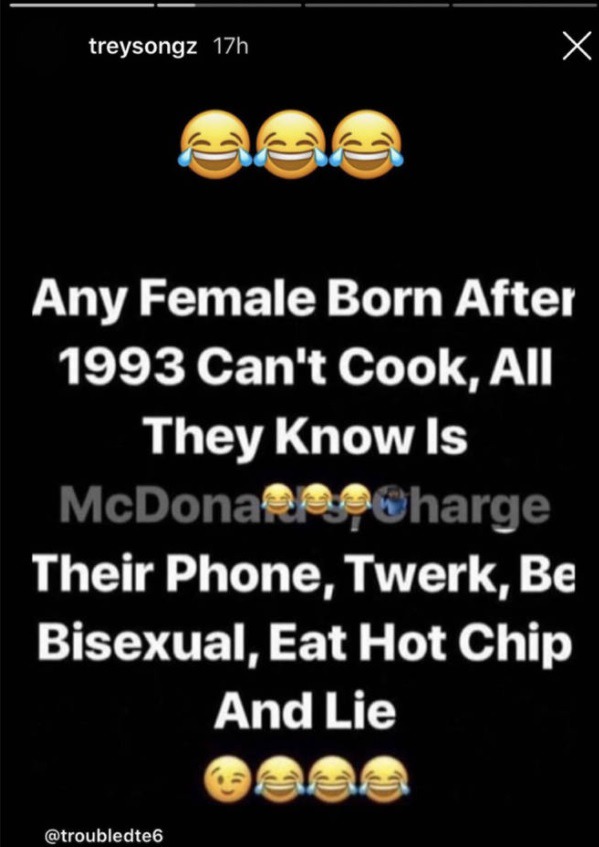 As you could imagine, the post attracted varied reactions from social media users with the majority of ladies slamming him for his below the belt joke. See some of the reactions below;

“Trey Songz is 35 and complaining about people born after 1993…. sir- move,” said another, while one added, “Why is Trey Songz, at his big age of 35, talking about what girls born after 1993 can do? What an embarrassment”.

“Why is Trey Songz concerning himself with women born after 1993?” wrote one.

Photo: See The Sad Moment Female Protestor Died And Was Wrapped In A B...

“I Am Heartbroken” – Beyonce Reacts To Ongoing Crisi...

‘Teach Me Nigerian Slang So I Can Join You’- Tyler Perry Tells Nig...

Cardi B Mistakenly Leaks Her Nude Photo On Social Media...

Man Who Worshipped Donald Trump, Dies While Fasting For His Recovery F...

‘While I Was Battling For My Life In The Hospital, My Mom Got Ma...