Popular radio personality, Afia Pokuaa known widely as Vim Lady is unenthused about the fact that former President John Dramani Mahama has not even made a whimper about the secessionist attacks in the Volta Region.

Considering the fact that the Volta Region is his stronghold and ‘world bank’ as it’s known politically, the leader of the opposition party is supposed to address the issue and call for the prosecution of the rebels, according to Vim lady. Recall that some secessionist group blocking roads leading to the Volta Region while clamoring for independence from Ghana.

Reports indicated that some of the members of the group numbering about 50 attacked police posts and took away ammunitions and cars belonging to the Police. Taking to Facebook, Vim Lady asked why John Dramani Mahama hs not condemned the attack yet.

Taking to her Facebook page, Vim Lady wrote: “Apart from hon Ablakwa, how many NDC officials have condemned this secessionist attack on the sovereignty of the Republic of Ghana? Prez Mahama, we are waiting to hear from you”. 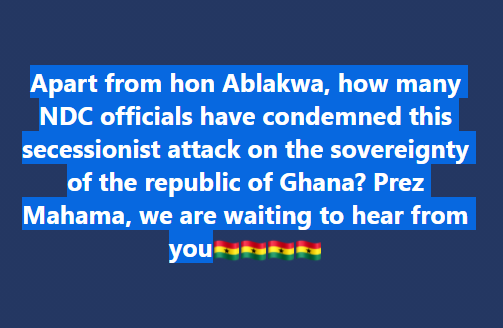 “Ghana has not gone back to the days of dumsor, we’re just doing maintenance works” – President Akufo-Addo assures

President Akufo-Addo has said Ghana has not gone back to the doom days of erratic power supply popularly known...
Entertainment News

‘They thought I wasn’t going to make it alone, they can’t stand the fact that I’m richer now’ — Mr. P brags

Video: “Don’t give your girlfriend more than 70ghc for hairdo” – Lady gives different prices of hairdo for guys to know

(+VIDEO) You Can’t Criticize Nana Addo’s Government Without Fear Of Being “Crucified” By Party Faithfuls And That’s Why Ghana Will Remain The Way It...