Burna Boy was initially called out on social media for conspicuously missing from the tall list of Nigerian and foreign celebrities who joined the EndSars Now protest.

He has now found ample time to respond to the criticisms by claiming his mother was battling with her life as she was operated upon which invariably means he had to be with her through that moment. This plausibly explains why he was ‘missing in action’ as thousands of Nigerians stormed the street to protest over SARS brutalities.

He wrote; I was Dealing with a Personal Family issue at the Beginning of these Protests. My mum Had Serious Surgery last week! We were all invested in making sure she recovers! I am not about that “put it all out on social media” life. We decided the focus must solely be on this protest. 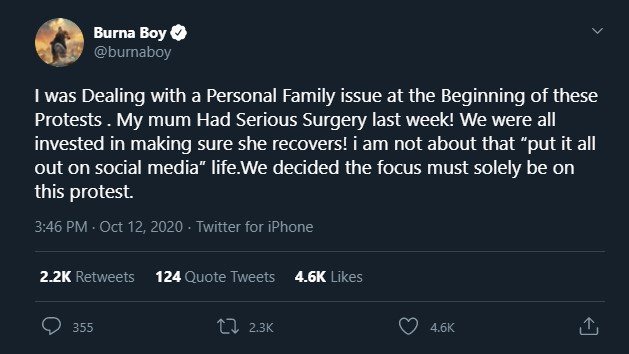 “Instead of a factory and hospitals, you build for us a prison?” – Critical thinking Netizens blast the Church of Pentecost

An Islamic cleric’s wife has reportedly died while having rounds of pleasure with her boyfriend during Ramadan. The married Muslim...
News

Throwback video of when Ken Agyapong promised to drink poison and die if Ibrahim Mahama doesn’t go to jail pops up after he established...

Delay causes frenzy on the internet with childhood photo

“Instead of a factory and hospitals, you build for us a prison?” – Critical thinking Netizens blast the Church of Pentecost

Man executed for a murder he never committed, now the real killer has been found

‘If You Don’t Win Grammy Next Year, I Will Stop Listening To Your Songs’-Nigerian Fan Tells Sarkodie