Obaapa Christy and Stella Seal end beef prematurely, hug in public to the delight of fans 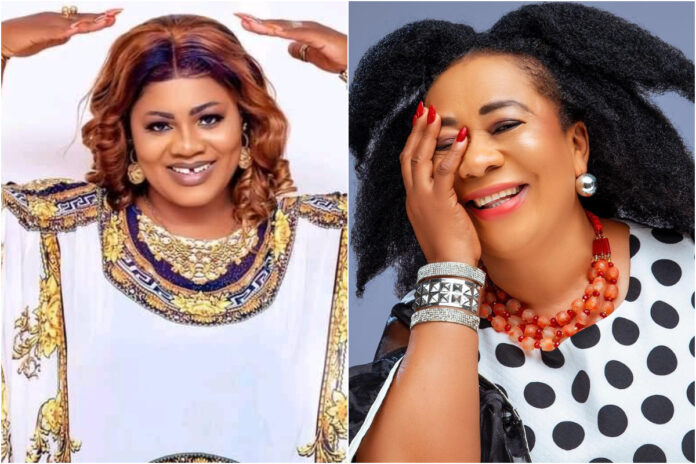 Obaapa Christy and her older colleague Stella Seal have buried the hatchet and subsequently hugged to the delight of their fans after going head to head recently over ‘miscommunication.’

The brief feud started after Stella warned the general public that the image she used in advertising Obaapa’s forthcoming concert to commemorate 20 years of being in the industry is fake.

Stella, formerly known professionally as Stella Dugan said she has no knowledge of the program as her colleague and her management never informed her before putting up the fliers.

In a statement that reads in parts, she stated: “DISCLAIMER: It has come to the attention of the management of Stella Seal Ministries that a highly publicized flyer which includes our artist, Stella Seal, is circulating regarding an upcoming Obaapa Christy Anniversary celebrations.

Obaapa, on the other hand, clarified the situation in a separate interview but eventually, she muddied the water which intensified the tension between them.

However, in this latest development, the duo appeared at the launch of Abena Serwah Ophelia’s new single ‘Womfa Mma No’ on Tuesday night.

They were seen in a dialogue in the company of Stacy Amoabeng and some other personalities. Obaapa was heard telling the veteran musician to forgive her for the miscommunication.

They then hugged and it was a beautiful moment.