Revealed: ‘Chioma Can Never Travel to The US Unless Her Boyfriend Davido Becomes A Politician’- Says Nigerian Journalist

Nigerian journalist, Kemi Olunloyo- who seems to be fixated with issues regarding Davido and his family, has claimed the singer’s girlfriend, Chioma Avril Rowland will never get the chance to travel to the United States of America (USA) unless Davido becomes a politician.

The controversial investigative journalist claimed Chioma has criminal records in the States hence the only way she can get to the US is by acquiring a diplomatic passport which she can only get when her fiancee becomes a politician.

“Davido’s fiancé Chioma has been denied a US visa 8 times due to her past criminal record. The only way to get into America is with a diplomatic passport when Davido becomes a politician.” 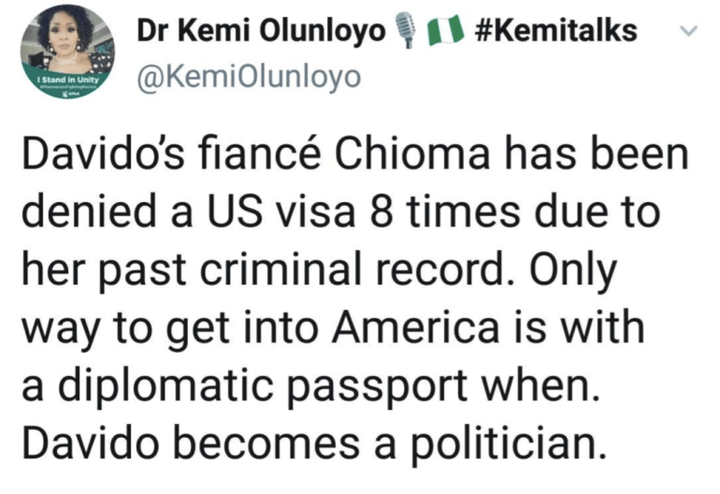 Previous articleKwaw Kese Drops Bombshell, Says He Knows A Lot of Ghanaian Celebs Who Are In The Pocket Of Ghanaian Politicians
Next articleOsebo Does It Again, Storms Social Media With Old School Level- See Photos

Rapper Strongman has released a new track titled 'Fix It" to give credence to the social media campaign which...
Nigeria Entertainment News

Pounding Of Fufu Has Helped Me Keep Fit – Kidi

Bank cleaner quits her job after 35 years, teaches her boss a lesson in an emotional note she left for her

19-year-old lady celebrates as she buys her own house, shares photos

‘Why Chioma is not a smart woman’- Blessing Okoro on Chioma, Davido’s unstable relationship