Funny Face has expressed lust over a comment made by actress Tracey Boakye and capitalize on the opportunity to beg for sex.

The sex-starved comedian who is clearly making his intentions known to the actress however mischievous it may appear said he will love to enter for two minutes.

The reason why Funny Face stated ‘two minutes’ as the average duration is because of the controversy that surrounded one of his earlier relationships where the lady said he can only last for two minutes in bed.

In a post shared on Instagram and Twitter with accompanying screenshots of Tracey Boakye’s comment, Funny Face said he is not the ‘papa no’. Which suggests that he is young enough to  have the strength and exuberance to sexually account for any goodies he gives to a woman unlike the ‘papa no.’

According to him, Tracey Boakye’s use of the word ‘my love’ for him is more or less like a game which he is really enjoying thus an opportunity to turn these words into bedroom gymnastics, cuddles and sexual climax with her will do him more good. 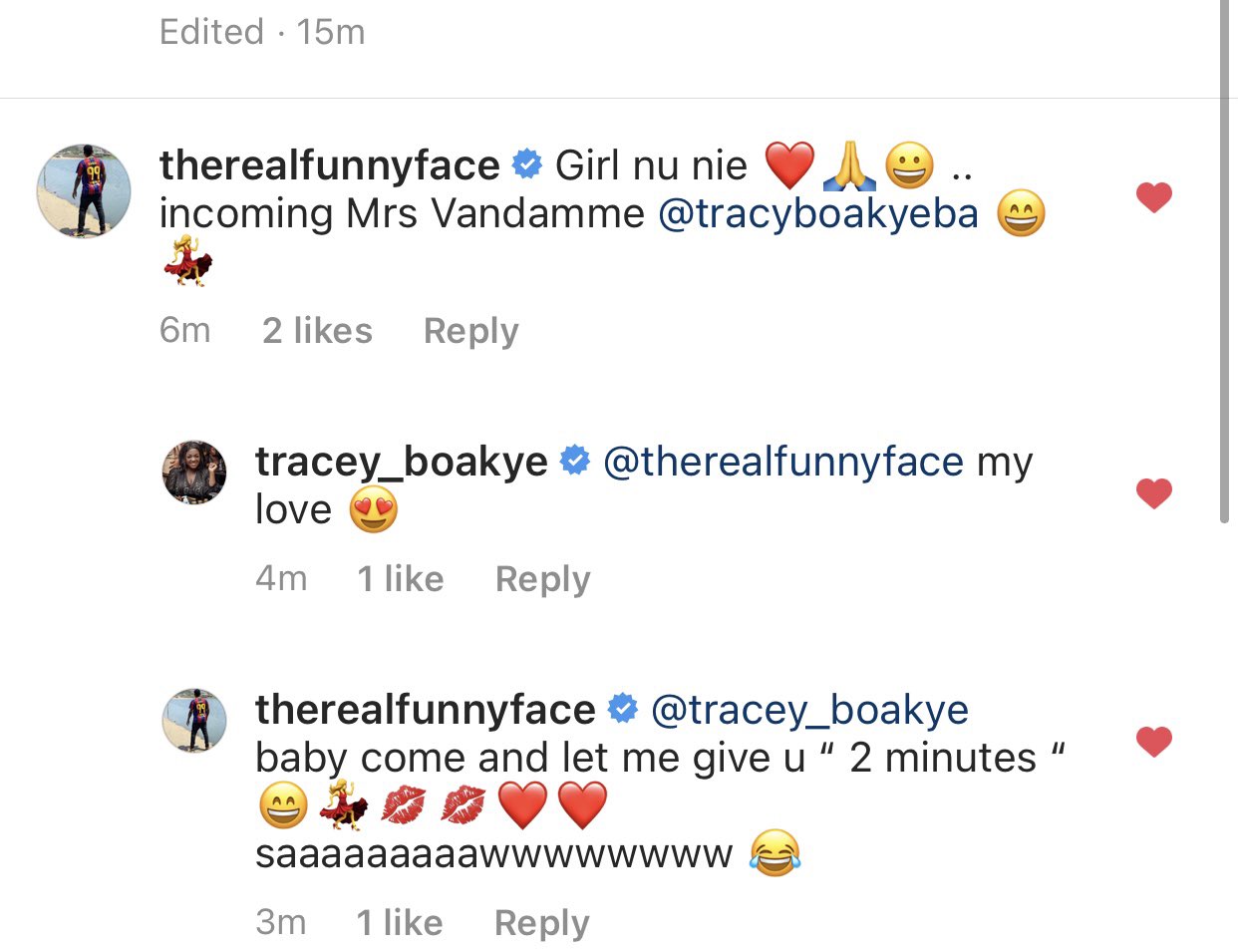 Ayisha Modi has prophesied her undying love for her ex lover, singer Ofori Amponsah while referring to him as her sweetest ex - husband. She...
Read more
Entertainment News

Pataapa And Girlfriend Reunite As They Plan To Get Married

From the looks of things Ghanaian musician Patapaa and his German girlfriend Liha have resolved their issue and are set to get married after...
Read more
Entertainment News

As Ghana is gradually preparing to go to the polls come December 7, a lot of Ghanaian celebrities who have endorsed the various political...
Read more
Entertainment News

Stonebwoy’s girl Ayisha Modi has often been seen fighting and jumping to the defends of the dancehall act. Ayisha Modi’s Statements Are Not My Official...
Read more
Entertainment News

The African Giant Burna Boy has got his second Grammy Nomination with his album ‘Twice As Tall’. The singer lost his first Grammy Award to...
Read more
Entertainment News

Some fans of Ghanaian TV and radio personality Deloris Frimpong Manso otherwise known as Delay have stated emphatically that she secretly got married and...
Read more

Kpakpo - November 23, 2020 0
A bunch of junior high school (JHS) students have been seen in a viral video twerking on the manhood of their male classmates at...

‘I Broke Up With My First Boyfriend Because He Couldn’t Fire...

Video of rich lady teasing and making fun of a beggar...

Rev Obofour And Wife Turn Heads At The Airport As They...

2020 Just Got Worst: Ghanaian Bride Who Got Married In Lavish...

Children Sent Me Voice Notes Asking Me Not To End My...