See The Funny Statement George Quaye Made After He Also Got A Global Humanitarian UN Award From Dr. UN

Rawlings’ Funeral: Photos Of The Former President Lying In State Surfaces Online Despite Ban On Camera At Viewing

A picture of the body of former President Jerry John Rawlings has gone viral despite a warning by state...
Read more

Most Ghanaians have been raising questions about the truth in the story of Abigail Mawutor who was seen...
Read more

Nigerian billionaire Ned Nwoko has revealed why even at a relatively older age, he prefers to marry young girls...
Read more

SAD: The last words of Eddie Nartey’s wife before her death pops up (+ Video

Dr. Kwame Owusu Fourdjour, aka Dr. UN, has become a celebrity overnight after he successfully scammed Ghanaian top celebrities and politicians in his infamous Global Humanitarian UN Awards which took place at the Alisa Hotel on August 28, 2020.

After the United Nations issued a disclaimer saying they have no association with Dr. UN which invariably reinforced the viral news that his award scheme is fake, the man has been carrying his shoulders high lately for his ‘giant-killing’ feat.

As the matter still trends on social media, he has returned to jokingly award radio personality, actor, and former PRO of Charterhouse, Geroge Quaye with the same award to consolidate the fact that he’s the man of the moment.  Geroge Quaye upon receiving his award threw a dose of humour to the whole scenario by thanking his friends and family members for their support which positioned him to also get this award.

He wrote; “Ooooh Yes! And we won one for the #latenightexpress! I would like to thank my mother, my father, my wife, the UN Secretary-General, the UN General Assembly, the Management and Staff of the Multimedia Group, my fans, family, friends, enemies, and most importantly, the members of the @latenightclan! Let’s celebrate this with some sweet GH love tunes from 10 pm only on Joy 99.7 FM! Please drop your titles and congratulations messages “ 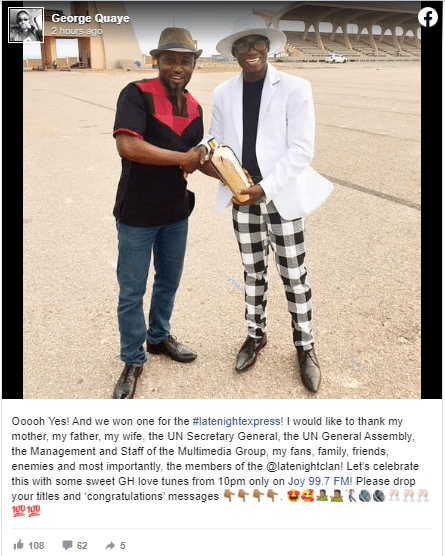 Previous articleI Will Support My Husband In Transforming Ghana If NPP Wins – Empress Gifty Adorye Pledges
Next articleVideo: Will Dr. UN Run For Presidency In The Forthcoming Elections?- See Why People Are Making This Suggestion

Former President Jerry John Rawlings was laid to his final rest at the Military cemetery at the Burma Camp...
Read more
Entertainment News

We Did Not See Eye To Eye: Nana Addo On His Relationship With the Late Rawlings

Former President Jerry John Rawlings was laid to his final rest at the Military cemetery at the Burma Camp in Accra today but that...
Read more

Celebrated Ghanaian broadcaster Jessica Opare Saforo has for the first time revealed the face of her only child she has been hiding from public...
Read more

Swedru based musician Patapaa is claiming artistes who didn’t come to his wedding are just jealous and ‘Jons’. Patapaa recently got married to his German...
Read more