"I approached him first and made my intentions known," this is what wife to diminutive Nigerian man Ofoegbu Vivian...
Read more

Actress Tracey Boakye after flexing us with her East-Legon house and calling herself East-Legon land lady, has finally put...
Read more

Okese 1 has released an official statement addressing the misunderstanding that ensued between himself and broadcaster-DJ Andy Dosty in the Hitz FM studios a day ago.

The content of the statement was a formal one which tackled all the issues surrounding why he arrived for the interview late and why his host got infuriated.

Okese 1 also, through the statement, has expressed his deepest apology to Andy Dosty and added that he holds him in high regards and looking forward to establishing a perfect connection with him.

Okese 1 also called on the public to stop making mountains out of molehills and begged bloggers to desist from rubbing more salt in his sores by creating contents that worsen the situation.

“Andy Dosty is a pacesetter in the Ghanaian music industry and I look forward to furthering engagements with him in the foreseeable future.”

“I appeal to the various media outlets and online bloggers to refrain from making a mountain out of a molehill as I focus on doing the one thing I love; making music.” 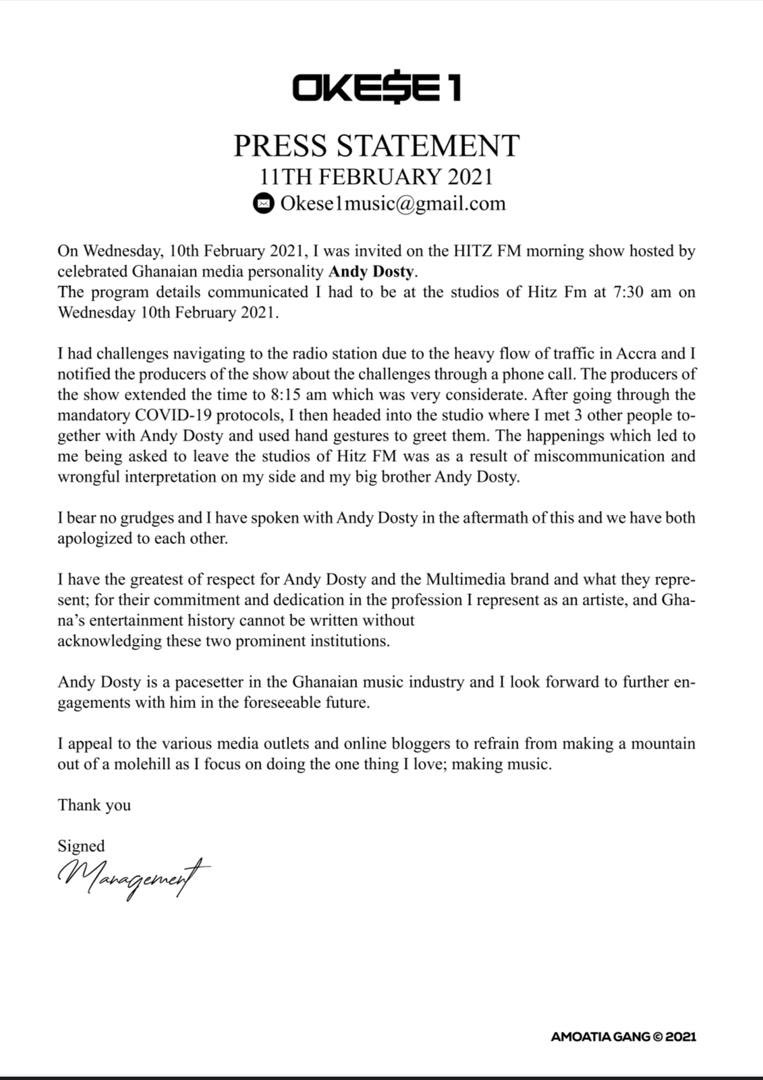 Previous article(VIDEO) Police Gun Down Two Notorious Armed Robbers After Trying To Steal Huge Sums Of Money
Next articleJackie Appiah Snubs Broke Men, Prefers To Hang Out With A Billionaire Any Day- Video

Election Petition: It is embarrassing that Jean Mensa did not testify and account to Ghanaians – Mahama

The Petitioner in the 2020 Election Petition case brought before the Supreme Court has said the failure of the...
Read more
News

” I disagree with the ruling of the Supreme Court” – Mahama

VIDEO: “I’ve Waited For Too Long For This Ring” – Lady Says As She Happily Accepts Marriage Proposal

The simmering friction between Okese 1 and rapper Medikal is beginning to redevelop into a heated argument fuelled by emotion and resentment. These two artists...
Read more

‘Don’t Ever Try That Thing With Me Again Because It Won’t Be Peaceful Between Us The Next Time’- Okesse1 Flares Up Again On Andy...

After the unfortunate incident between Okesse1 and Andy Dosty a couple of days ago, they both apologized to each other on radio and trashed...
Read more

Ghanaian rapper Okese 1 has disclosed his other sources of income. According to him, he does not make all his money from the music he...
Read more

Retraction & Apology: “I will ensure that DJs in Ghana never play your songs” – Andy Dosty challenges Okese1 as the two ‘clash’ on...

On Wednesday, February 10, 2020, it was reported that Andy Dosty had challenged Okese 1 that he was going to ensure that DJs do...
Read more