“Someone should please come and marry me, it’s urgent” – Single Lady begs for husband

A lady is virtually begging for a husband, calling on any man interested in her to walk her down...
Read more

A security man seeking to further his education has penned an emotional message to his female boss to show...
Read more

Peter Famiyeh Bozah, known within the showbiz world as Famiyeh has melted hearts on the internet after his girlfriend gave birth to their first child.

Shortly after the baby was handed to him, Fameye took to Instagram to wrote this adorable words: The singer posted a photo holding his son with the caption: “Father bless me and my family @arvid_jnr_fameye my superstar you will be great @_ohemaaa_ ??.”

From the above, the name of the baby was also revealed. His name is Arvid Fameye Jnr.

The ‘Nothing I Get’ hitmaker recently clashed with a fan who complained of the monotony of his songs. According to music lovers, he should start talking about different contents in his songs because they are tired of listening to him as if he’s the only one who is struggling in life.

Well, a fan tweeted that: “Chale, squad for get different content give Fameye waa. Every song he go make biaa the content be ‘nothing I get’ like ebi only am p3 dey struggle for life. Tsw.” 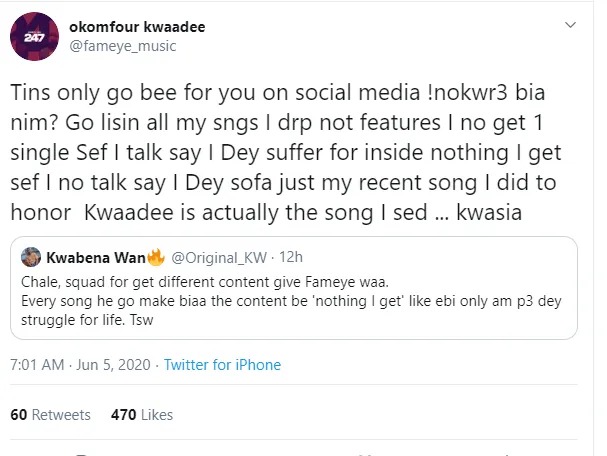 Following the recent developments on the LGBT community's demand for the respect of their rights, numerous individuals have had...
Read more
Entertainment News

Ghana: You can be jailed for 25 years if you practice blowj0b, oral s3x and threes0me [Details]

VIDEO: South African Man Demolishes House He Built For His Girlfriend After She Said He Was No Longer Her Class