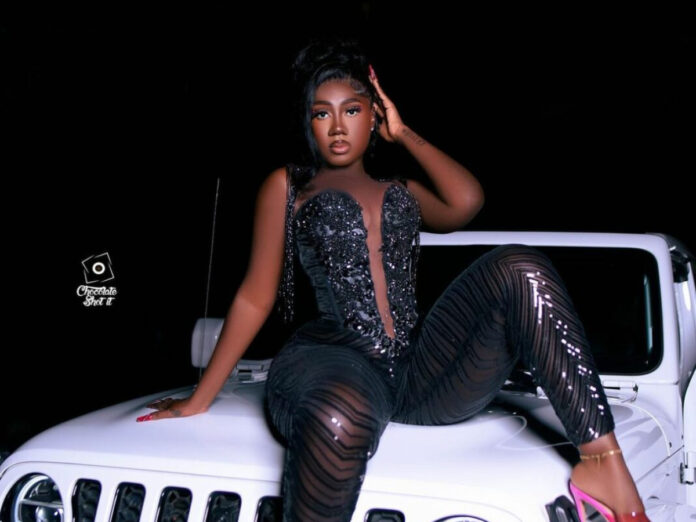 Hajia Bintu is in the news and once again, her sensuality and aura are the main features trailing her.

The TikTok star flaunted a new jeep in new photos shared online sparking varied responses from her cluster of fans.

Beyond that, her seductive persona, consolidated by her jumpsuit outfit became the focal point of the post she uploaded.

Hajia, real name Naomi Asiamah became a year older today, November 30 and we understand the car was gifted to her by a ‘powerful’ man whose identity has not been established yet to commemorate her special day.

Check out the photos below;

Similarly, Days after she stormed Nigeria to probably show them first-hand the goodies behind her that her mama gave her, Hajia Bintu became the proud owner of a Jaguar saloon car.

Beaming with smiles, Bintu who featured in a hilarious Mr Macaroni comedy skit while in Nigeria, is seen in a video flaunting her car keys while her friends whose faces were not revealed in the footage congratulated her on her new achievement.

“Congratulations girl, a new whip under a whipping wig,” her friend said and she replied, “I know right” whilst tossing her new car key.

Bintu gave her friends a ride in her new car as they jammed to Fireboy DML and Asake’s ‘Bandana song which got them singing out loudly that “dem never see me comin’ (joor-joor, joor-joor) Hmm-mm, comin’ (l’Eko) Mo gbe wan ni “is coming”.