Popular Nollywood actor, Emeka Enyiocha has penned a profound message to the power couple of BBNaija Season 5 edition, Ozo and Nengi on how best the former can handle Nengi and possibly marry her.

In a post on social media, Emeka said if Ozo is really serious about Nengi and wants to translate their affair into marriage, then he has a blueprint for him to follow.

He wrote; OZO YOU BE MAN BIKO 🙏🙏 🙏 , My Brother, if u are real about NENGI, not that u want to chop & clean mouth, don’t stop going for NENGI Most men can go as far as doing traditional marriage just to CHOP à girl to prove a point, later waka.🏃.

For showing the world how to love, how u feel about NENGI, don’t stop as long as she will pick ur calls & talk to you. Don’t mind what people say, na OBIAKPO dey worry most people 😄 These days,men don’t have that time to treat a woman like you did to NENGI openly, that kind of show of love is what majority of women wish for Most men do WORSE things behind closed doors & come openly to feel like KING KONG🤭 Don’t relent, go for what ur heart ❤️ desires. Don’t let people define who you are with their situation OZO YOU BE MAN BIKO🙏 IT’S A GOOD DAY 🙏🙏🙏” 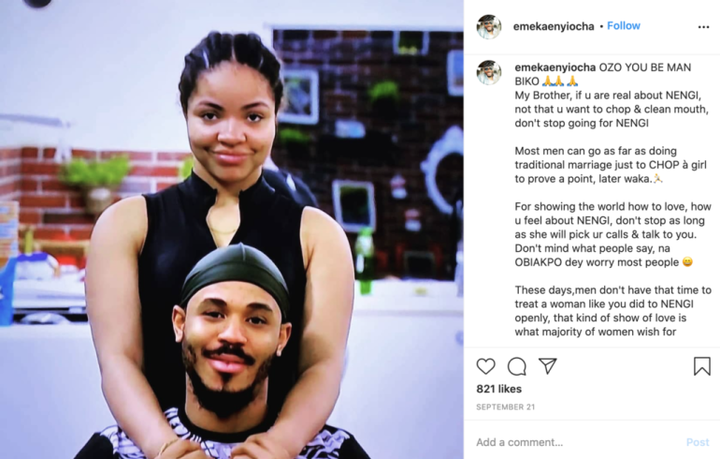 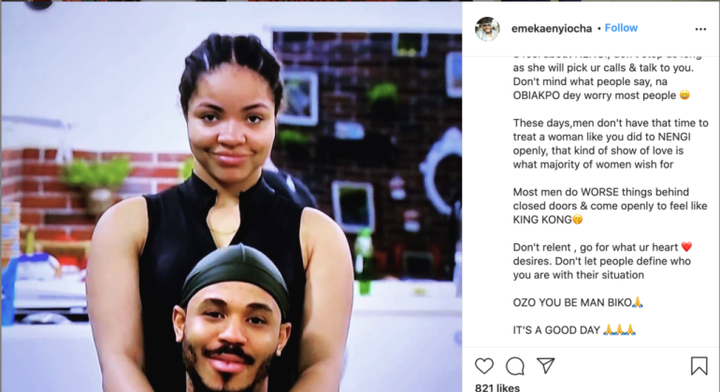 Video: Burna Boy’s Mansion In Nigeria Burnt Down By Rioters...

‘I Have Never Been In A Good Relationship Because Of My Hot Temp...

“You will become more than I am” – Davido extends birthd...