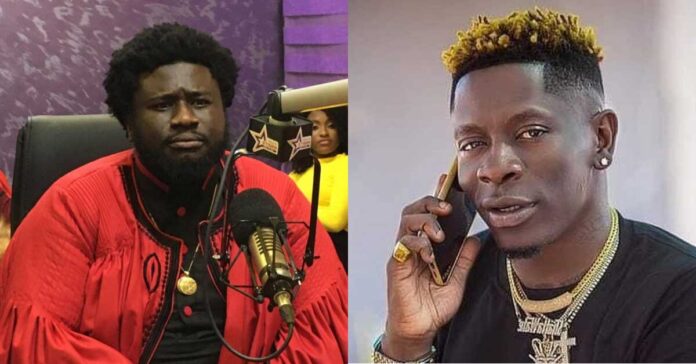 Founder and leader of the Universal Spiritual Outreach Society, Prophet Kwabena Boakye Asiamah, popularly known as Ajagurajah, has waded into the Shatta Wale and Medikal incident that caused their arrest.

Medikal was given a 5-day prison sentence after he brandished a gun on social media, whiles Shatta Wale was also jailed for faking a shooting incident.

Sharing his honest view on the issue, Ajagurajah stated that whoever is serving as the spiritual father of dancehall artiste Shatta Wale is spiritually powerful.

The controversial man of God told Kwasi Aboagye on Okay FM that he was very thrilled when he witnessed Wale and Medikal go through the traditional African ceremony, adding that the spiritual father of the two singers is doing a fantastic job.

He claims that the cleansing would fend off all of the evil and bad luck connected with incarceration, and he thanks their spiritual father for his wise advice, which led to the two musicians going to the beach immediately after their release from prison.