“Someone should please come and marry me, it’s urgent” – Single Lady begs for husband

A lady is virtually begging for a husband, calling on any man interested in her to walk her down...
Read more

If supporting #LGBTQI will send me to  hell, then I’m ready to meet Satan – Bridget Otoo

Bridget Otoo has grown bolder and relentless in her support for the legalization and protection of rights of individuals...
Read more

Have you Seen $15000 Dollars In Your Life? Manage Your Life Before Managing A Talent – Nana Akua Addo Fires More Shots At Ayisha...

Singer Adina Thembi could not hold back her tears when she was called to perform at the memorial vigil held for the late former President Rawlings.

It was not her performance alone that put many into a state of nostalgia but the song “Everything I Do” by Bryan Adams which she gorgeously sang sent chills down the spines of all gathered therein. 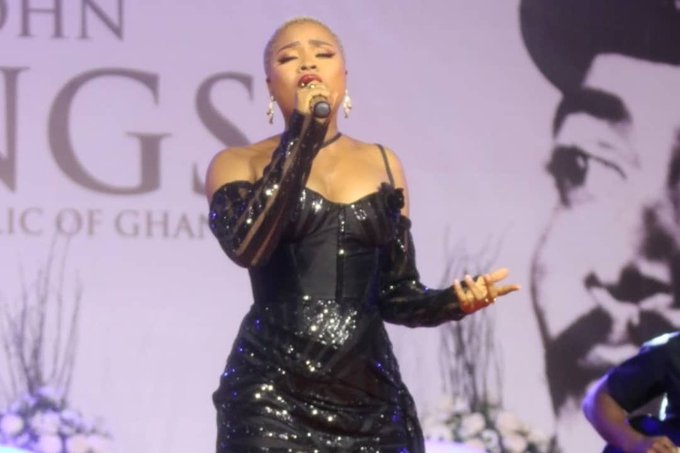 On the night of 24th January 2021, Adina gave all those who went for the vigil a moment to reflect, a time to look back and a reason to allow their tears flow uncontrollably down their cheeks.

Clad in the resplendent black gown to reflect the reason for their gathering, Adina had a hard time controlling her emotions as she intermittently wiped off tears from her eyes and sweats from her brow.

The vigil was held at the Air Force Officers Mess in Accra which had family, friends and political comrades of the late Rawlings in sober attendance.

Bayern Munich defender, Jerome Boateng is being investigated for allegedly tearing the ear of his girlfriend Kasia Lenhardt a...
Read more
Uncategorized

Ras Nene Aka Dr. Likee Shares Story Of How He Got His New Names ‘Likeee’ And Aka Ebenezer (video)

I Support LGBT, You Are Not God to Judge – Rootikal Swagger Pipes Up

Ama K Abebrese Sides With Gays and Advocates For Their Rights

Sekou Nkrumah who happens to be a son of Dr Kwame Nkrumah has chided late Jerry John Rawlings over some of his dealings as...
Read more

Touching: Find out what John Mahama promised the late Rawlings in his tribute

John Mahama of NDC fame in his tribute to the late Rawlings has vowed to ensure that the NDC party will continue to grow...
Read more

Ashanti Cultural Display At The Funeral of An Anlo

The  Final funeral rites of the late President,was culminated with a 4 day ceremony was held that witnessed the display of Asante Culture surprsingly...
Read more

What’s the meaning of Rawlings had a good and bad side? – Leila Djansi questions GH journalists

Highly-opinionated US-based Ghanaian filmmaker, Leila Djansi has raised some concerns about the commentaries made by a section of journalists in the country following the...
Read more